On Thursday, September 15, 2022, the USC Alumni Association will honor and recognize the outstanding contributions of volunteers at the annual Volunteer Recognition Dinner. These volunteers have devoted their time and energy in service to the University. Awards are presented in four categories: President’s Award, Widney Alumni House Volunteer Award, Volunteer Liaison of the Year Award, and Volunteer Organization of the Year Award.

Nominations for the 2022 awards must be submitted online beginning Monday, May 2. The deadline for nominations is Wednesday, May 25, at 5:00 p.m. PDT.

The 2022 honorees will be announced, and the Volunteer Recognition Dinner registration will open in July.

The President’s Award recognizes the outstanding leadership contributions of a volunteer over the course of several years, which may include fulfillment of a formal leadership position and/or achievements in informal activities. Other factors considered are the volunteer’s overall record of service, loyalty, dedication, and contribution to the Trojan Family. Typically, up to five President’s Awards are presented each year.

These awards recognize the outstanding contributions of volunteers through service to the Trojan Family. Important factors include a record of sustained volunteer service to a school or department at USC and relevant achievements during this service. Typically, up to 20 Widney Awards are presented each year.

Volunteers associated with any USC academic or administrative department, recognized alumni or alumnae organizations, or multicultural and other affinity groups, are eligible for the Widney Alumni House Award.

Volunteer Liaison of the Year Award

This award is presented to a USC staff member for his or her work with USC volunteers and recognizes outstanding contributions to the development and implementation of USC volunteer programs. The award encourages the effective, efficient, and creative use of the University’s volunteer base by university staff. Eligibility criteria may include volunteer recruitment, training and recognition, leadership development, communications, marketing, and programming. The satisfaction of volunteers impacted by the nominee is also considered. One or two Volunteer Liaison Awards may be presented each year.

Volunteer Organization of the Year Award

This is the only award given to a USC volunteer organization in recognition of outstanding contributions to the Trojan Family and the advancement of USC. Important achievements considered are organization formation, membership growth, retention and involvement, overall development, quality and creativity of programming, communications, successful fundraising initiatives, and leadership. The honoree organization demonstrably supports the overall mission of USC. One or two Alumni Volunteer Organization Awards may be presented each year.

Any volunteer organization recognized by the University or one of its departments is eligible for the USC Volunteer Organization of the Year Award. 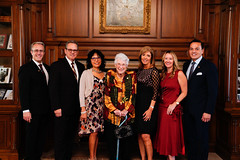 If you are looking for information about the Alumni Leadership Conference, click here.

OK
We use cookies and similar technologies to understand our visitors’ experiences. By continuing to use this website, you agree to this condition of use. For further information please see our privacy notice.
Manage consent

This website uses cookies to improve your experience while you navigate through the website. Out of these, the cookies that are categorized as necessary are stored on your browser as they are essential for the working of basic functionalities of the website. We also use third-party cookies that help us analyze and understand how you use this website. These cookies will be stored in your browser only with your consent. You also have the option to opt-out of these cookies. But opting out of some of these cookies may affect your browsing experience.
Necessary Always Enabled
Necessary cookies are absolutely essential for the website to function properly. These cookies ensure basic functionalities and security features of the website, anonymously.
Functional
Functional cookies help to perform certain functionalities like sharing the content of the website on social media platforms, collect feedbacks, and other third-party features.
Performance
Performance cookies are used to understand and analyze the key performance indexes of the website which helps in delivering a better user experience for the visitors.
Analytics
Analytical cookies are used to understand how visitors interact with the website. These cookies help provide information on metrics the number of visitors, bounce rate, traffic source, etc.
Advertisement
Advertisement cookies are used to provide visitors with relevant ads and marketing campaigns. These cookies track visitors across websites and collect information to provide customized ads.
Others
Other uncategorized cookies are those that are being analyzed and have not been classified into a category as yet.
SAVE & ACCEPT